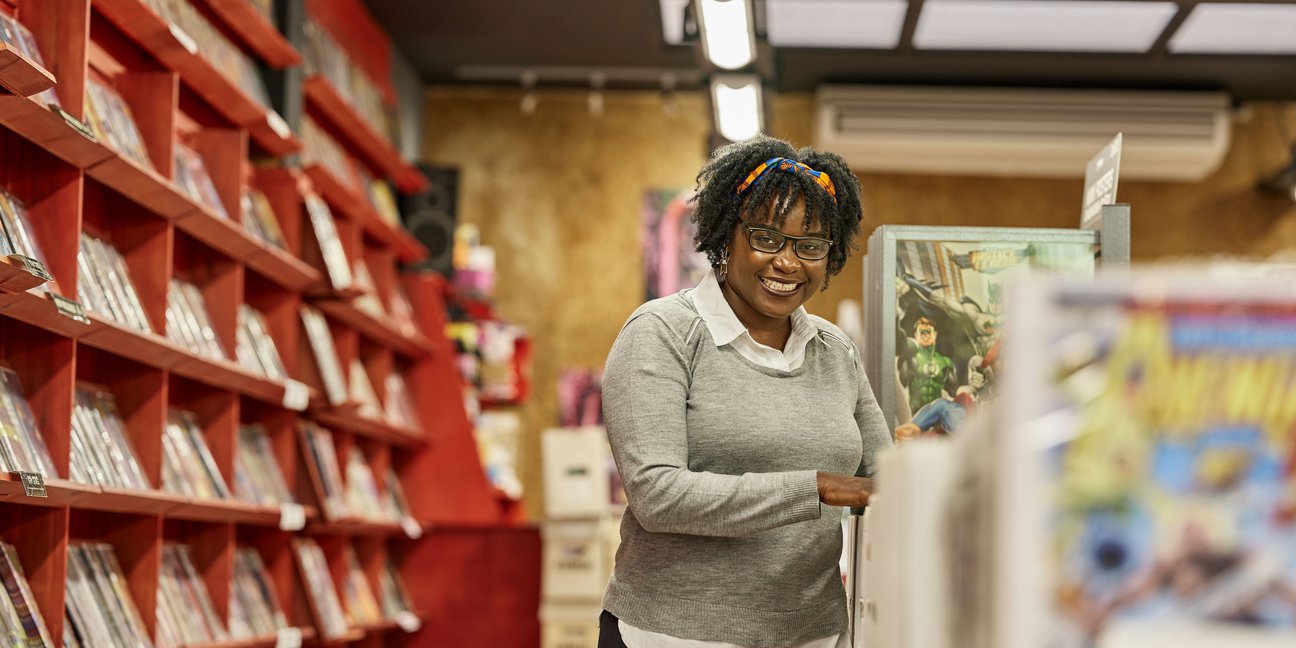 Born and raised in London, Simone Haynes has always been aware of the challenges facing children in U.K. cities. After her 16-year-old cousin was sentenced to five years in a young offender institution, she started running money management workshops in prisons, creating opportunities for inmates to learn vital life skills. When she realised she wanted to help children avoid being drawn into offending in the first place, she retrained as a teacher. “Working in inner-city schools, it’s easy to see how children get lost in the system,” she says.

These experiences inspired Simone to create Comic Mania, an online creative writing platform where children can craft comic strips starring characters that represent themselves. “It’s important for children to see themselves in positive stories that reflect their own authentic experiences,” she says. Her goal is to create resources that make children feel represented, empowered, and entertained — while providing “a creative outlet and alternative” to activities that could disrupt their life chances.

In 2021, Comic Mania received funding from Google.org through Camden Giving’s Equality Fund, enabling Simone to work with developers to create her Comic Maker software. She began meeting with a Google mentor and completed skills training through Google Digital Garage. “I don’t have a tech background, so my Google mentor walked me through every step of running a digital business,” Simone explains.

Comic Mania is a mobile-first platform, but Simone also runs workshops in schools. “I want to help children be creative wherever they are, even if they don’t have access to a computer at home,” she explains. She initially created a demo that she thought was “amazing”, she laughs. “But feedback from my Google mentor really improved the user experience. She taught me how important it is to take Comic Mania users on a journey.”

Simone also completed the Get Started with Analytics module on Google Digital Garage, which has been “crucial to my business,” she says. “Having access to data, such as which characters are most popular, helps me make informed decisions when creating content.”

By studying Comic Mania’s analytics and discussing the results with her mentor, Simone realised some of the site’s pages weren’t grabbing children’s attention fast enough, prompting them to leave the platform. As a result, she introduced video content that plays as soon as users land on certain pages, and redesigned the Comic Maker to capture children’s imaginations as quickly as possible. “Those changes were directly influenced by advice and insights from Google,” she says.

Simone has big ambitions for Comic Mania, including expanding the business’s global reach. A short film inspired by Comic Mania characters, starring London schoolchildren, will premiere on YouTube in autumn 2022. She’s about to start studying for a Google Career Certificate (online courses that provide accessible pathways into high-growth sectors) in Data Analytics. “Experience has taught me not to get complacent — there’s always more to learn,” she observes. And she’s developing an online creative writing course for kids, with support from her Google mentor.

“For me, the goal is to raise aspirations,” says Simone. The majority of children who use the Comic Mania platform don’t just create short comic strips, she says; they’re crafting pages and pages of complex, funny, and meaningful stories. “When I look at the data on our dashboard, I can see they’re putting real time and effort into their comics, and that they’re sharing their creations with others — they’re taking pride in their work.”

After in-person Comic Mania workshops, children have told Simone that they’re interested in becoming writers when they grow up, or working in animation. “They’re so keen to share their ideas, and so enthusiastic,” she says. “That’s when you know you’re getting through and broadening horizons — which is what it’s all about.”

“I don’t have a tech background, so my Google mentor walked me through every step of running a digital business.”