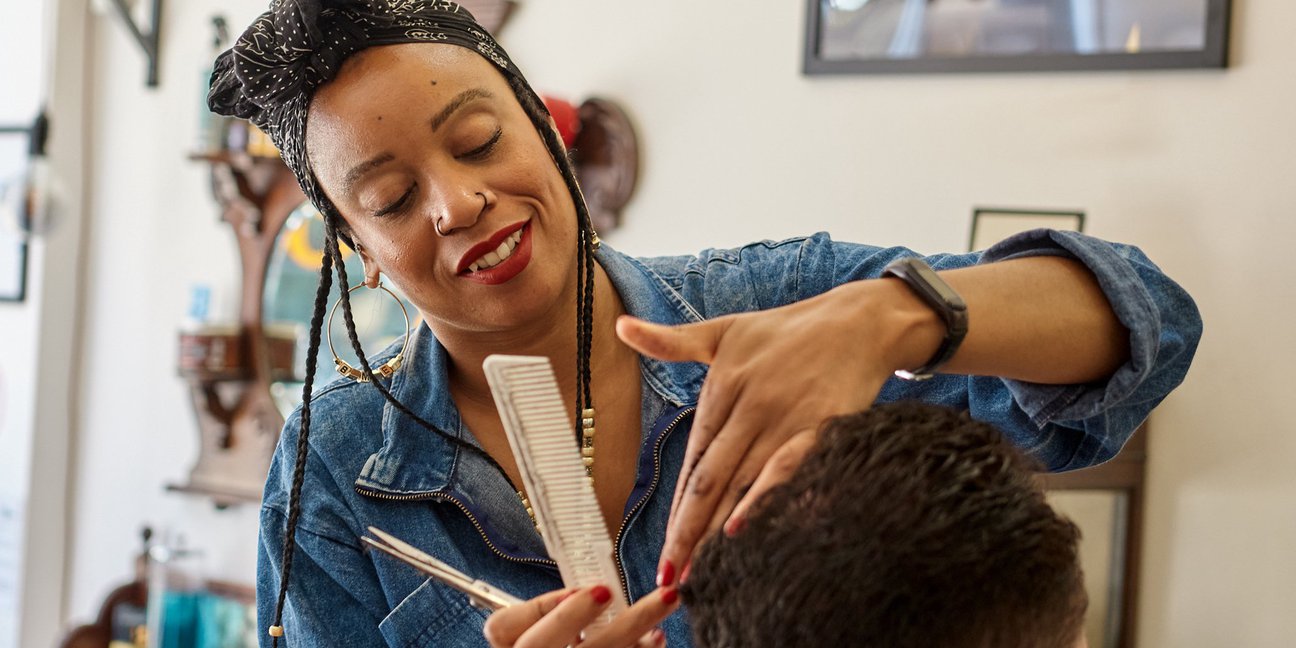 Based in the Kensal Green area of North West London, Levy & Co is a men’s barbershop – founded and run by Syreeta Levy.

As a gents’ barbers run by a black, gay woman, Levy & Co attracted some curiosity when it first opened its doors. Two years on, the shop has established itself as a bright, open, and fun place to get a haircut – its success a clear testament to the strong personal connection that Syreeta naturally forges with her customers.

“It comes down to two core things; haircuts and counselling,” Syreeta says of the people that regularly take her chair. “And from time to time, everyone needs those.”

The inspiration for opening Levy & Co was Syreeta’s late brother, who, before passing away, had urged Syreeta to start her own business.

“Of course, when I did open, I wanted to name it in his honour – but his name was Rodney and he hated it. So, I called it Levy & Co – as it’s our surname."

The unique personality of Levy & Co is something that clearly resonates with customers and has always been something that Syreeta has been keen to emphasise.

Being accessible to customers is key for survival in this cut-throat industry, so making the business visible online was a major goal for Syreeta. Another key consideration was to find a way to spend less time organising bookings – and more time focusing on customers.

As a new face in the area, Syreeta set up a business profile on Google to establish Levy & Co online.

“Being a new face in the area, Google My Business helped to introduce me to the neighbourhood.” Syreeta says she set the ‘Women-Led’ and ‘LGBTQ+’ attributes as two of the main business descriptors on the company’s Google My Business profile, as she believes it is a part of the business that appeals to many of her clientele. “Especially to a lot of my LGBTQ+ customers,” says Syreeta. “Some of whom are put off by more traditional, male-run barbershops.”

Syreeta’s also added photos to her profile, enabling more people to see Levy & Co’s unique character. Customers clearly appreciate the quality of the product too, judging by the numerous positive reviews left on the profile. In 2020, Syreeta was planning for another year of growth but in March Levy & Co. had to suddenly close due to the pandemic outbreak.

After months of lockdown in the UK there was a huge build up of demand and, in order to remain COVID compliant, Syreeta knew her online booking portal would be key to managing appointments. Setting up her Google My Business profile to send customers directly to her booking page allowed her to focus on her customers, rather than the admin. With people unable to get haircuts, and many having attempted to trim it themselves, Syreeta knew she’d have her work cut out. “I had to do a lot of fixing,” she recalls. “I fixed a lot of haircuts – and even helped fix a few relationships.”

Before COVID struck, most appointments were made by either customers coming into the shop, or calling and booking over the phone. With neither of those an option due to COVID restrictions, a smooth online-only booking system was going to be key and Syreeta says Google My Business has been an invaluable tool. “Google My Business has been perfect, it’s really helped to make things run more efficiently,” says Syreeta. In fact, July 2020 saw traffic from mobile increase by over 400% compared to the previous July.

"I guess, because of lockdown, there were a lot of people at home looking online to find barbers in the local area – and our Google My Business page is one of the first things they see,” explains Syreeta. For Levy & Co, this translated into a 70% increase in bookings – all coming via her website. “The number of people that came through the Google My Business profile to the website was off the scale,” recalls Syreeta, ”I'm not kidding you, in July I worked 10 hours a day, seven days a week.”

The ‘Women-Led’ and ‘LGBTQ+’ icons clearly help Levy & Co stand out, too. This means that as well as attracting a loyal local clientele, Syreeta’s shop often draws in customers from further away – simply because they are intrigued by the shop’s set up and ethos.

Her customers clearly share the love, as their profile has received over fifty 5 star reviews, with many praising not only the haircut, but the whole Levy & Co experience. “Syreeta is a master”, reads one review. “Her cuts are always on point, as is her vibe.” This sentiment is echoed across many other reviews.

Syreeta has some words of advice to other women setting up businesses in traditionally male working environments: “You can do it. There are no limits for women – the only limit is yourself. So, if you've got the means, and you've got the right people around you, you can do anything you want to.”

“Being a new face in the area, Google My Business helped to introduce my business to the neighbourhood.”